About Art of the March

Dedicated to the Organizers and Participants
of the Boston Women’s March, January 21, 2017

in the aftermath of the historic Boston Women’s March on January 21, 2017. This website contains digital images of over 6,000 signs placed by protesters, as the march ended, on the iron fence of the Boston Common Central Burying Ground and along its perimeter. A trio of college professors asked city parks workers, who were prepared to clear the site, for permission to collect the signs. Volunteers from the public joined in gathering and loading them into a rented van for safekeeping. In the months following, the artifacts were digitally scanned by additional volunteers, and an online public archive was created.

The collection is a rich and inclusive snapshot and record of the extensive range of issues, emotions and visual expressions at the march. The signs are handmade and unique, but also connected in a rich web of cultural references, themes, memes, and visual techniques and styles. As the most extensive collection of contemporary protest signs representing a single event of this scale, the archive is a valuable resource for scholars, activists, and others, interested in social movements, civic media, and vernacular design.

Why archive these signs?

Beyond the diverse political leanings of those who participated in the Boston Women’s march, this collection reveals a wealth of information on contemporary civil society in an age of political polarization and instant networked social communication. The collection speaks for individual voices within the current political rhetoric, slogans, debates and concerns of society and splinter groups in the United States of America. It brings together an abundance of revelatory visual examples with which to study the voices and visions that constitute social movements. With it one can analyze communication concepts, and preserve idiosyncratic expression in the era of social network media. It also brings to light old and new aesthetics of personal, social and political strategies.

How was this accomplished?

During a period of time while the signs and posters were stored, a team of Northeastern University researchers organized and facilitated a weekend documentation event where volunteers from the university and the Boston area photographed and catalogued the posters. Research grants from the

College of Arts, Media and Design at Northeastern University allowed further sorting, tagging, analysis and categorization the digitized images. Designers, software developers and archivists collaborated with the research team to create various digital means to examine, sort and annotate the documents and images, resulting in this first public view of the entire collection.

Art of the March from Emily Gordon on Vimeo. 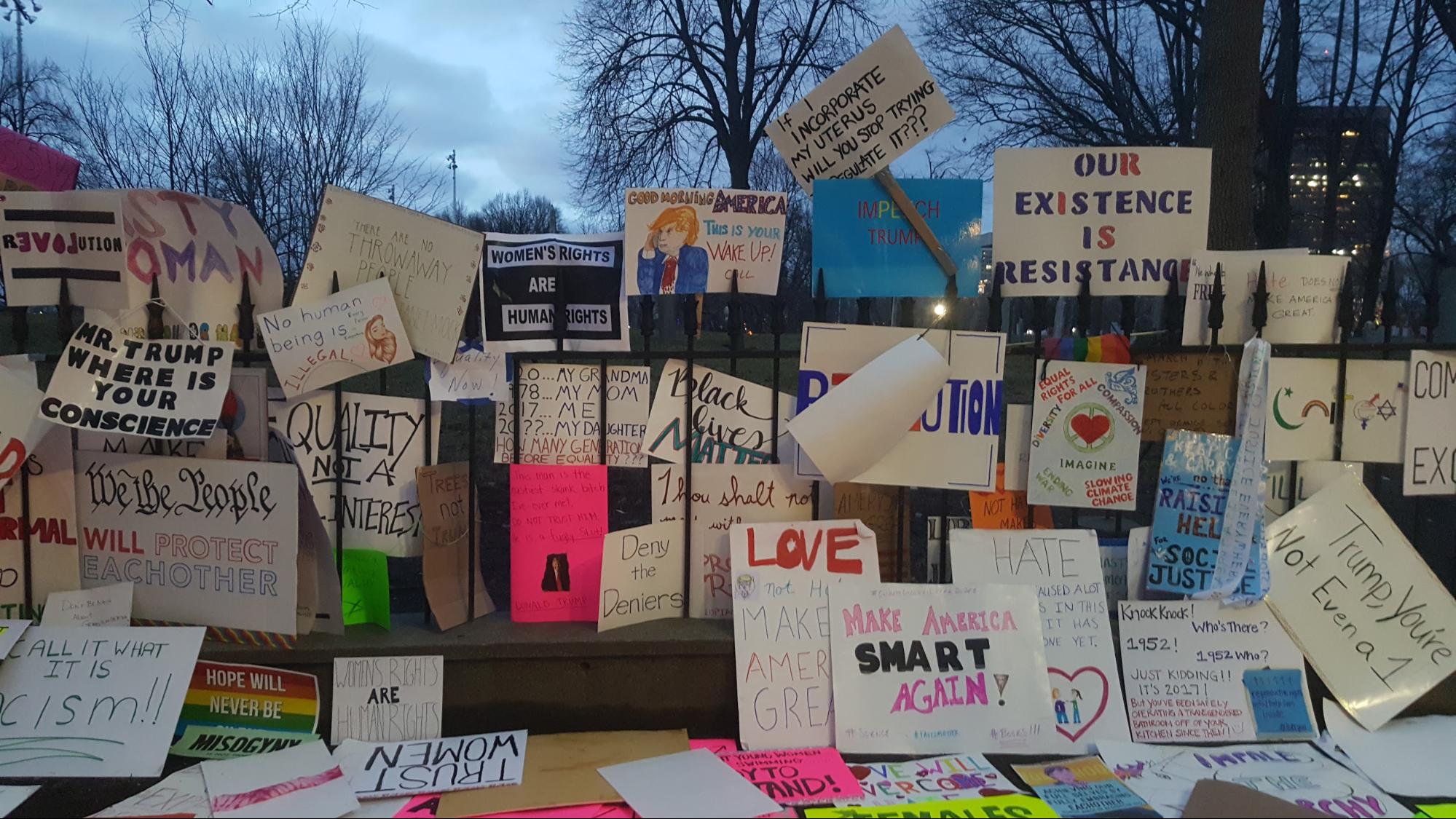 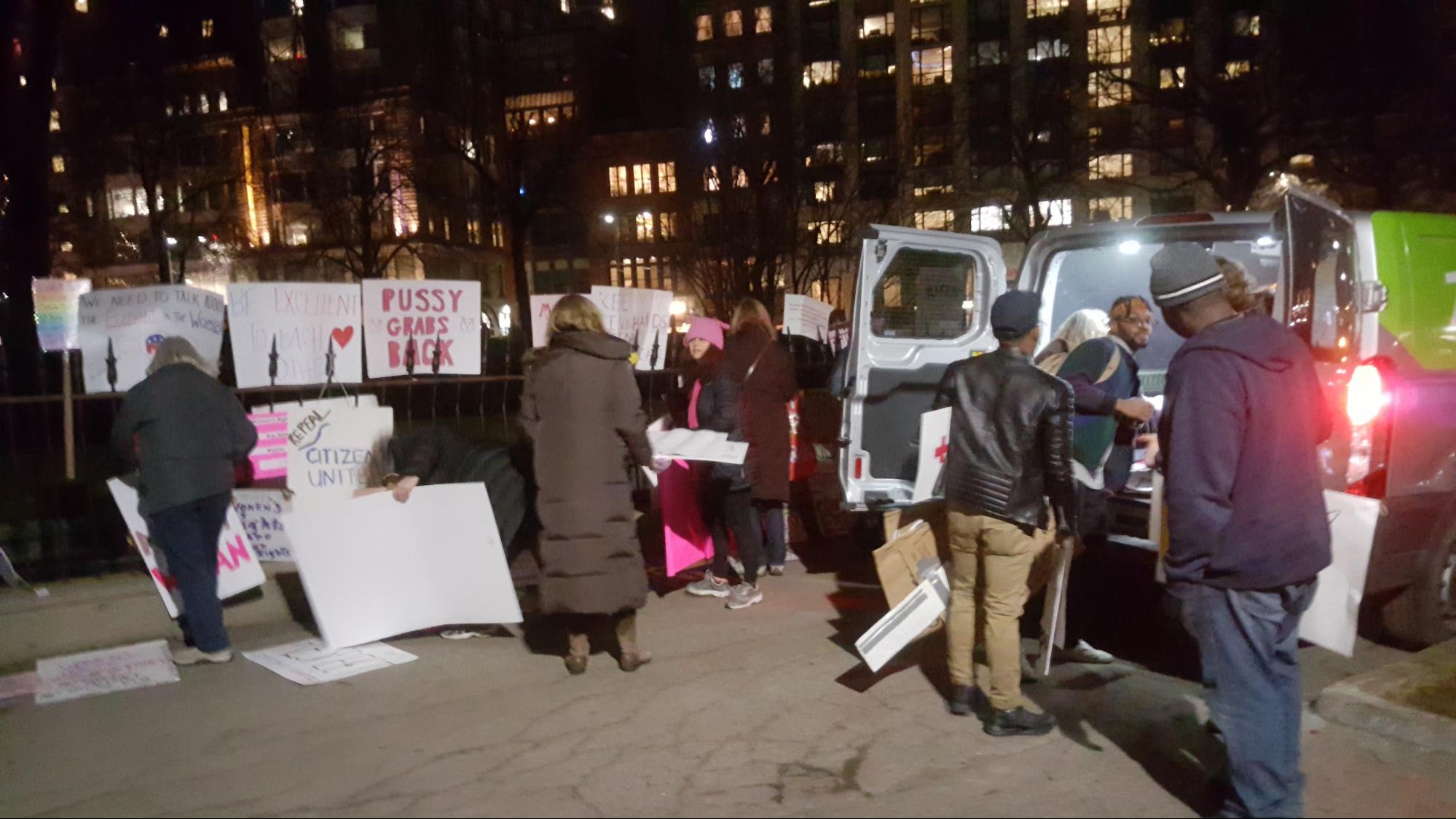 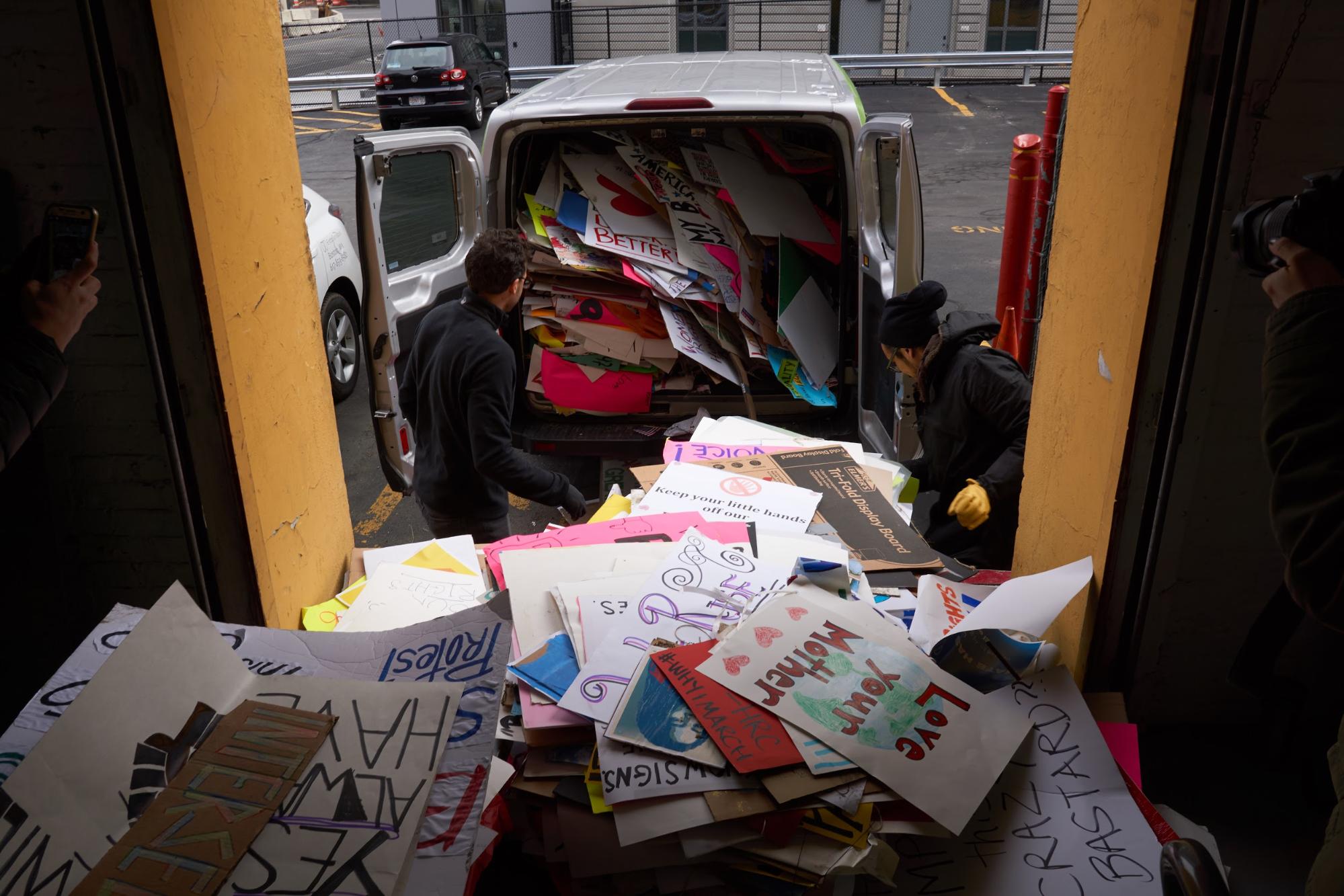 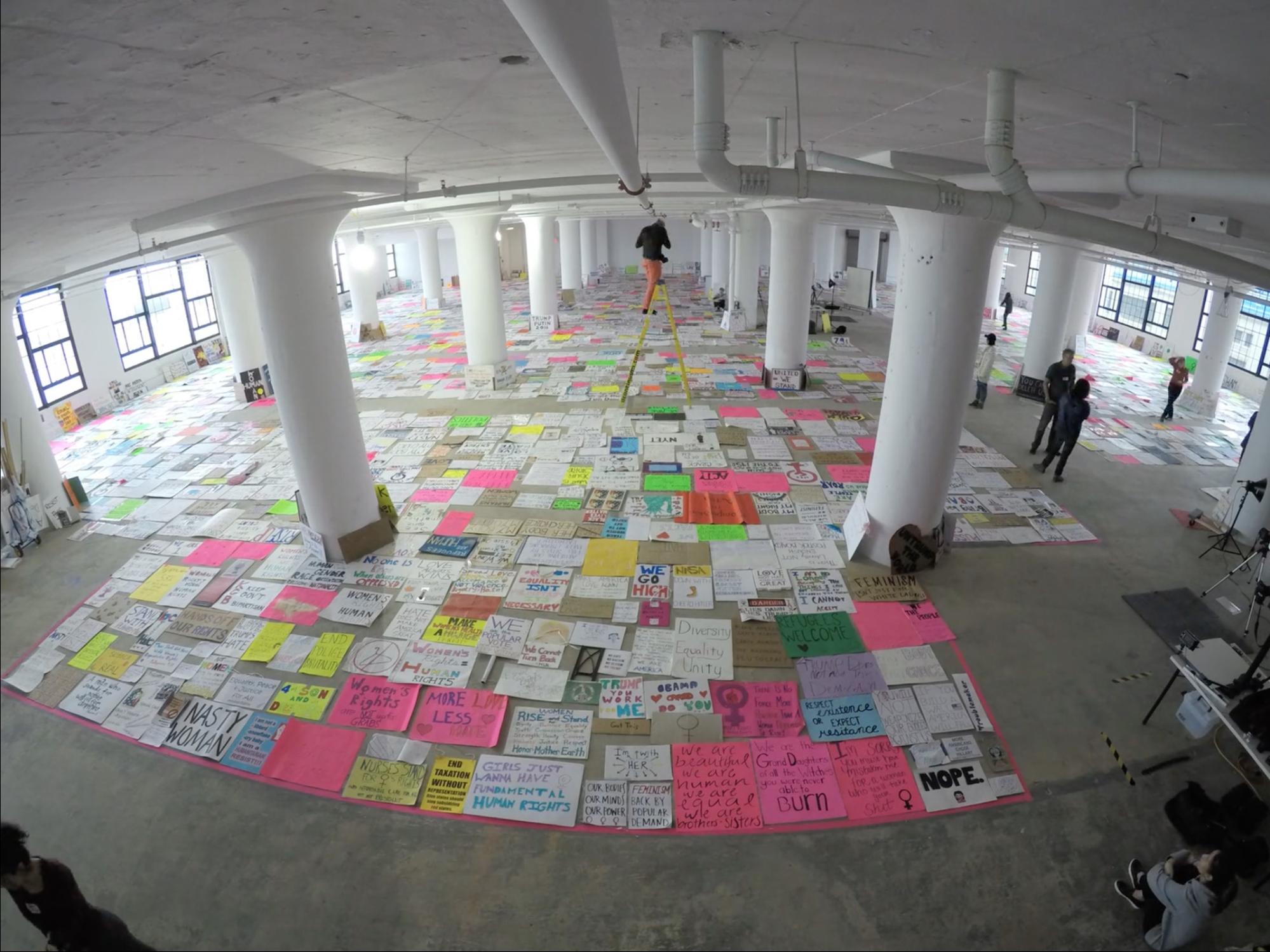 Documentation and digitization event in April, 2017 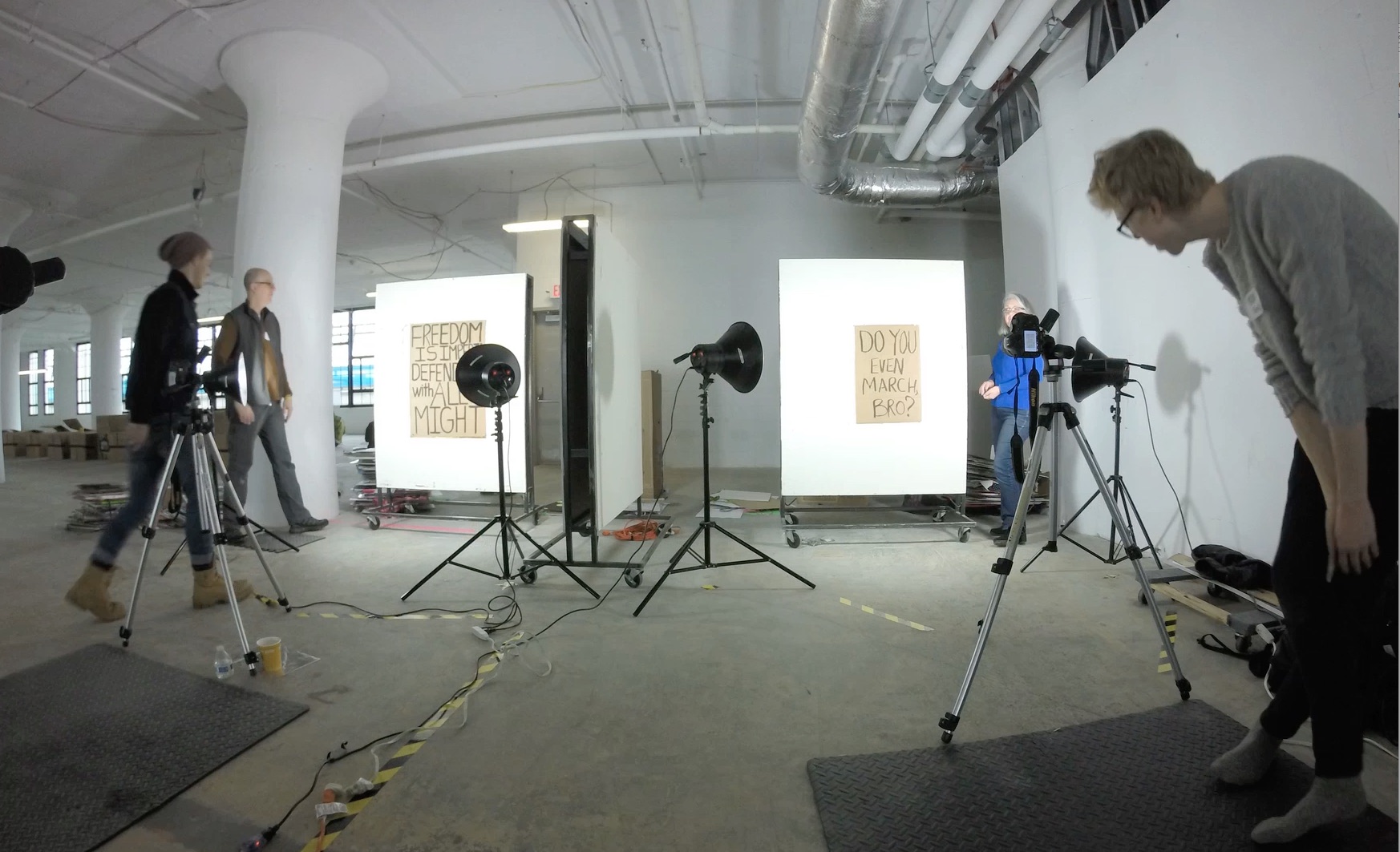